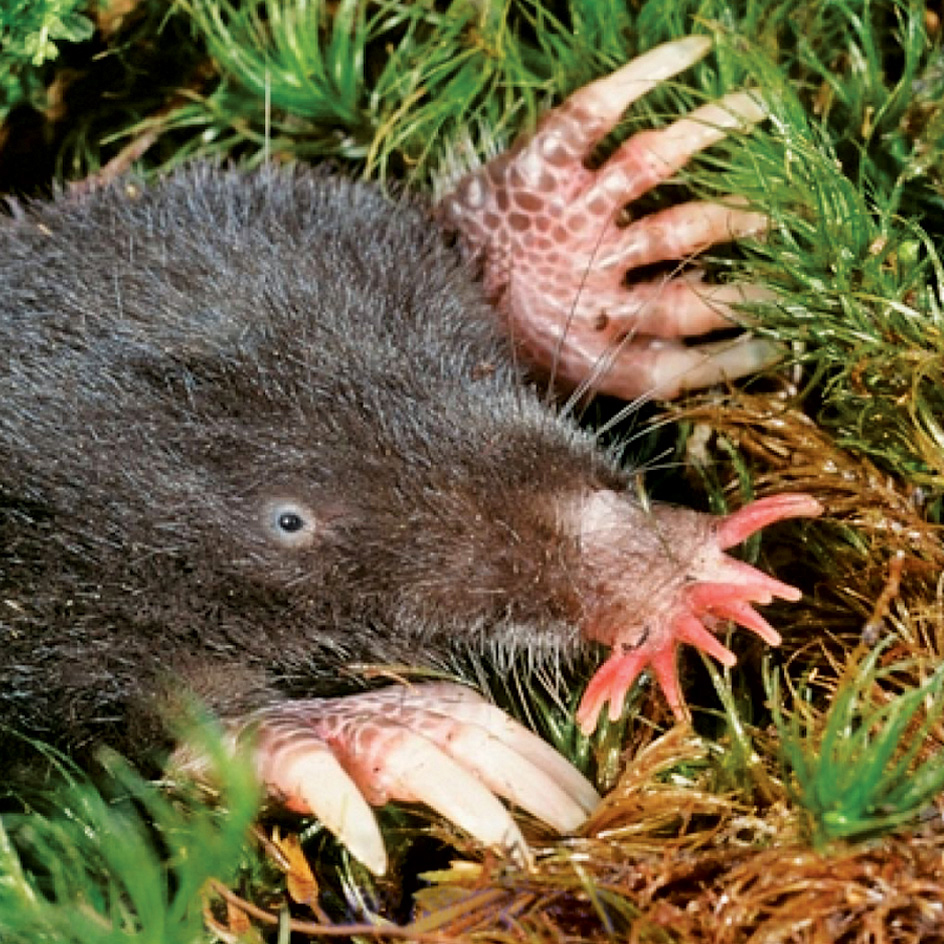 The star-nosed mole is aptly named. Its distinctive snout consists of twenty-two tendrils ringing a pair of nostrils and, from some angles, the entire setup resembles a misshapen star. The tendrils are fleshy and look a bit like fingers and, like fingers, they have a certain “manual” dexterity. But why? Why does the mole have such a singular appendage as opposed to something more ordinary? What is the function or purpose of this bizarre structure? From the dedicated work of Ken Catania (Vanderbilt) and colleagues, it appears that the appendage facilitates rapid handling of small prey items, making it advantageous for an organism whose diet consists of tiny invertebrates. We might therefore hazard that this feature arose evolutionarily because it conferred this benefit (thereby answering our “why” question). Yet the matter is difficult to resolve because current utility does not permit a straightforward inference to reason-for-existence.

Problems of this sort have exercised students of living things for more than two millennia. Aristotle offered the first systematic account of why animals have the parts they do. He held that a key element to answering these questions was provided by an understanding of the telos or purpose of particular organs. Yet while the theme of purposiveness has been continuously salient from antiquity to the present-day, two developments in biological theorizing have challenged its interpretation and significance.

The first and most familiar was the advent of evolutionary thinking by Darwin and others during the 19th century. Prior to the 19th century, natural philosophers and theologians had formulated ways of using natural evidence to support arguments about the existence and attributes of a deity, a tradition that reached its zenith in the work of William Paley. Darwin argued that the design-like quality of organisms could be accounted for by different means. In particular, he argued that if organisms vary in their characteristics, and if some of these variations make a difference in the struggle for existence, then a process of “natural selection” will tend to fashion useful adaptations, provided favorable variations are reliably transmitted to offspring.

For many biologists, Darwin’s achievement sounded a death knell for teleology, rendering obsolete all talk of “purposes” and “purposiveness” applied to nonconscious life. Despite this, however, closely related terms continued to be utilized, such as “function” and “adaptation,” which are ubiquitous in areas such as behavioral ecology and evolutionary genetics. Indeed, Darwin himself employed these terms liberally, which has led some to claim that Darwin—far from vanquishing teleology—in fact reinvented it.

Teleology, however, remains a term of poor repute, standing at once acquitted and condemned: acquitted as phenomenology, but condemned as an explanatory strategy associated with final causes or intelligent designers.

The second development that has shaped the interpretation and role of purposiveness in biological thought is the origin and elaboration of mechanistic conceptions of living phenomena. These conceptions have been on offer since antiquity, but rose to prominence in the 18th and 19th centuries as scientists sought to identify new laws, principles, or forces operative in living things.

Mechanistic conceptions have traditionally been defined in opposition to a loose body of beliefs labeled “vitalism.” These argue in one way or another that life cannot be wholly understood in physico-chemical terms - something additional (whatever that is) must be invoked. The attractiveness of these beliefs arose in part from genuine explanatory difficulties, such as the problem of accounting for the seemingly goal-directed phenomena of embryogenesis, and in part from a view that organisms are intrinsically purposive entities. These motivations also animated early 20th century organicism, which sought an alternative perspective that took the purposiveness of organisms seriously while avoiding “unscientific” metaphysical claims about vital forces and the like.

Recent decades have seen a revival of interest in these non-vitalistic alternatives to mechanism, both within biology and outside of it. In addition, cognate lines of thinking inspired by the study of far-from-equilibrium, self-organizing systems have received increased attention. Outstanding questions abound and concern things like the kinds of organizational regimes maintained by living systems, their dependence (or lack thereof) on other regimes, and their relationship to properties of (active) matter. Increased scrutiny has also been directed at the concept of goal-directedness: what does it mean for a system to be goal-directed, and what is the relationship between goal-directedness and agency?

Although the concept of agency has traditionally been conceptualized in terms of cognitive phenomena like intentionality, greatly restricting what counts as an agent, many philosophers and theorists now countenance the possibility that most biological organisms are genuine agents. This perspective is reinforced by modeling approaches from game theory that find application in diverse biological investigations. Together with other theoretical approaches, game theory provides a powerful tool for understanding the role of agency in evolution, although concerns have been raised about the suitability of certain of its assumptions and idealizations. Additionally, a skeptic might object that these models require only a heuristic treatment of organisms or their parts as agents and therefore can dispense with any substantive interpretation of this vocabulary.

In addition to renewed discourse on concepts like function and agency, a third locus of discussion related to these historical developments is directionality. Many evolutionary biologists, for example, have sought to characterize directionality at the scale of populations, with events in populations potentially translating into biased evolutionary trajectories. So, as advocates of niche construction theory have argued, if organisms select or modify a particular environment, then they and their descendants may be exposed to novel selective pressures and developmental conditions, imposing a type of directionality on evolution.

Developmental biologists interrogate directionality on a different scale. They ask how we should comprehend the reliable and robust generation of species-specific characters in development. Answers vary and involve appeals to everything from dynamical systems to physical processes, and from gene regulatory networks to environmental inputs. These answers matter, too; many human pathologies involve directionality gone awry, such as in tumor formation and metastasis.

Still another type of directionality obtains on the vast spatial and temporal scales of geohistory. What kinds of directionality characterize the history of life on Earth, and what do they teach us about the processes responsible for them? These issues have been hotly debated since the 19th century and continue to stir passions today. Recent studies have generated new insights, as paleontologists increasingly utilize more - and more standardized - data, as well as new analytical techniques for correcting biased data and establishing the validity and robustness of recorded patterns.

In addition, new genomic methodologies are beginning to make possible the integration of knowledge of molecular trends in genomes with trends in the fossil record. Together, these promise new insights on the causes of directional trends in life’s history.

A science of purpose?

Where does this leave us? Clearly, purposive phenomena remain central to biological inquiry despite significant and substantial developments in evolutionary theory and mechanistic modeling. How might these phenomena be investigated scientifically, especially given their riotous diversity? Can we simultaneously be careful and rigorous about the use of descriptive language that imputes purposiveness to living systems - and not merely as a heuristic convenience?

What if a research program was organized to come at these questions from multiple conceptual, theoretical, and empirical angles simultaneously? And what if we could foster a systematic interdisciplinary conversation that brings the wide range of conceptual resources for talking about purpose into the context of model building, experimentation and careful thinking about new ways of doing biological investigation?

These are the types of questions at the heart of a new initiative entitled “Agency, Directionality, and Function: Foundations for a Science of Purpose” funded by the John Templeton Foundation. It takes seriously the demand that conceptual frameworks need to be translated into rigorous theoretical models and discriminating empirical tests.

The project addresses the demand through a novel, interdisciplinary, large-scale program that combines philosophers, theoreticians, and experimentalists to accomplish four tasks:

Seven clusters composed of three to four distinct research groups under the leadership of a coordinator will pursue these tasks through a variety of collaborative activities that include:

These collaborative activities leverage the fact that each cluster is organized around key concepts (e.g., function and goal-directedness), modeling practices, and distinctive phenomena at diverse temporal and spatial scales (e.g., behavior, development, ecology, genomics, and macroevolution).

The titular reference to “a science of purpose” signals that the outcomes sought from this project are new conceptual, theoretical, and empirical foundations for future multidisciplinary investigation of purposiveness. These foundations will foster new lines of scientific research based on an increased array of conceptual possibilities, distinctive formal modeling strategies, and next-generation experimental platforms.

Together they will facilitate the discovery, observation, and manipulation of a variety of biological phenomena that fall within an agenda of central problems posed by living systems. This agenda represents core issues in the life sciences and arguably motivates much of what happens day-to-day across biology. To break things open in the manner anticipated by this project requires that we distinctively organize and undertake new research on purpose.