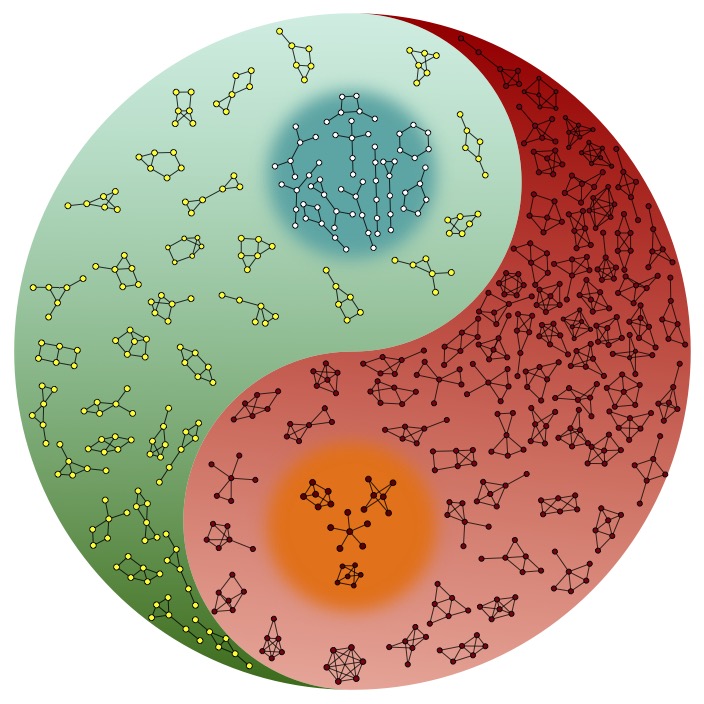 How would you describe your research interests?
I study evolution from a theoretical and mathematical perspective. To me, evolution is a general idea that encompasses not only biological evolution, but cultural and technological processes as well. All these processes are driven by the fundamental principle that entities (organisms, ideas, words, technologies, etc.) that thrive in their current environment will make more copies of themselves, and these copies contain small differences that provide the material for further evolution.

I am particularly interested in how the structure of a population affects its evolution. For example, a population that is spread out over a wide-ranging habitat will evolve differently from one where all organisms are grouped together. Family groupings and mating patterns also affect how a population evolves. In the cultural domain, the evolution of ideas is affected by the social or communication network on which they spread.

One of my central questions is how these forms of structure affect the evolution of social behavior. Here, I’m using “social” to mean any behavior that has an effect on others. So in this sense, even microbes engage in social behavior, for example by releasing chemicals that may help or harm other microbes around them.

To me, this is interesting on a number of levels. Biologically, cooperation enables complex collective behaviors that would be impossible otherwise. On the level of human culture, we can ask what kinds of structures will facilitate the kinds of large-scale cooperation we need to overcome challenges such as the climate crisis. And philosophically, these evolutionary questions can shed new light on perennial questions of morality, altruism, and the collective good.

What are the major questions in your field right now?
Over the past couple decades, it has become clear that some cooperative behaviors (meaning those that help others within the population) evolve more easily in spatially structured populations than in unstructured populations where every individual interacts equally with every other. The basic principle here is that cooperative individuals can cluster together in space, and to some extent avoid exploitation by “free-riders” who would benefit from cooperation without making their own contributions.

However, the details of when, and how strongly, spatial structure facilitates cooperation are still being sorted out. This question has seen an explosion of results recently, with many new papers each year. This is exciting in that it indicates a great amount of interest in the field, but it also presents a challenge to integrate all these results into general principles.  In some cases, minor differences in the setup of a mathematical model can have striking consequences for which behaviors are favored. In these cases, it can be hard to distinguish which is the modeling artifact, and which (if any) is the robust general principle.

There are also differing conceptual and mathematical approaches. There are at least three distinct research communities working on this set of questions. One is evolutionary game theory, which represents social behavior as a game (such as the Prisoner’s Dilemma), the outcomes of which determine individual’s reproductive success. Evolutionary game theorists tend to be interested in how the details of game, structure, and dynamics affect the outcome of an evolutionary process. The second is multilevel selection theory, which emphasizes the role of groups and the balance of cooperation versus competition within these groups. And the third is inclusive fitness theory, which emphasizes the role of interactions between relatives (parent, sibling, etc.). Inclusive fitness theorists also tend to be interested in question of organismal design - how evolution shapes the traits and behaviors of individual organisms - in contrast to evolutionary game theory, which is more concerned with questions of dynamics.

To some extent these approaches all speak to each other, but there are also strong disagreements over their respective validity and generality. In particular, I and others have pointed out that some of the central results from inclusive fitness theory are less general than often claimed, and require special assumptions that are not needed in other approaches. This claim has been controversial, however, with others arguing that these limitations are either unimportant or can be overcome.

What was your path to this field?
When I started graduate school, I was interested in pure mathematics. I loved the beauty and elegance of pure math, the power of its abstract modes of thinking, and the way it offers a certain kind of absolute truth - we know with certainty that any statement proven from a set of fundamental axioms will hold whenever these axioms are satisfied.

However, once I started moving from courses into research, I found pure math to be quite isolating. Most of the open problems in pure mathematics - outside of famous conjectures that are unlikely to be resolved anytime soon - are so specialized that only a handful of people in the world work on each of them. This means it’s hard to talk about ideas, even with others in the same department, let alone with friends outside of academia.

So I started looking for other fields where I could apply my math skills to questions of real-world importance. Evolutionary theory turned out to be a good fit - it has a kind of mathematical elegance, but with important real-world implications. It also appeals to me on a conceptual and philosophical level, in that it can help us understand where we come from as humans, and how we might shape our future.

How does your path to this field inform your current work?
Even though I am now an applied mathematician, I feel like I still carry my “pure math spirit” with me. Part of the mindset in pure math is that we can make ideas more general and powerful by expressing them in an abstract way. A basic example of this is algebra: the distributive identity a(b+c) = ab + ac encompasses infinitely many numerical equations (such as 2 × (3 + 5) = 2 × 3 + 2 × 5) in one simple formula, by abstracting these numbers into variables. A more advanced example is group theory, in which the fundamental properties of symmetry are distilled into three axioms. Any theorem proven from these axioms applies to any kind of symmetry, with applications ranging from card-shuffling to atomic orbitals to 3D graphics.

I think there’s a lot of scope for applying this kind of abstract thinking to evolution. Evolution is built on the fundamental principles of variation, selection, and inheritance, not unlike the fundamental properties of symmetry that are formalized in the axioms of group theory. So if we can abstract and formalize these principles of evolution in an analogous way, we can start to prove theorems that apply to a broad class of evolutionary processes.

This kind of abstraction and generality can help resolve some of the current difficulties in the field. General theorems of evolution can help us put the dizzying array of results into context, and to distinguish robust principles from idiosyncratic modeling artifacts. They can also help draw connections between different approaches, perhaps showing them to be different facets of a single general principle.

What’s new about this current project? How does it differ from your previous work?
In this new project, I’m delving into questions of collective behavior - moving from “what does an individual do?” to “what does a set of individuals do?”. In particular, I’m asking whether evolution can imbue collectives with a common purpose or goal.

This question has been taboo in the field for a long time.  The dominant mode of thinking has been that individuals are the only purposive agents in evolution, and that all collective behavior can be reduced to individuals following their own goals. To me, this dominant viewpoint is overly reductionist, and does not necessarily follow from the principles of evolution. If a collective of individuals share genes for a certain behavior, and if this behavior has a significant effect on their collective fitness, we may indeed see them acting as if they had a common goal, over and above their individual interests. Potential examples of this include single-celled amoebae that join together to form a multicellular slug when looking for new food sources, or ants that construct living bridges for other ants to walk upon. Collective behaviors like these abound in nature, but there is so far no satisfactory mathematical theory to explain how and when they evolve.

I’m very excited to be working on this question right now, because I think there’s real progress to be made in understanding how collective behaviors evolve. This would have implications not only for biology, but also for human society as we grapple with multiple global challenges. I also think this work has the potential to resolve some of these disagreements among evolutionary game theory, multilevel selection theory, and inclusive fitness theory, which up until how have seemed intractable.